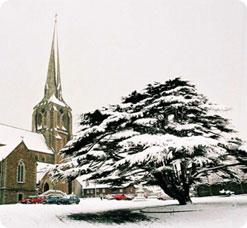 During the early decades of the nineteenth century, it became apparent that existing church space in Wexford town wasn’t sufficient for the congregations, and something would have to be done about it.

The following is an account of the efforts made to build and then pay for the twin churches, an effort that spanned over three decades and continued long past the opening ceremonies in 1858.

Dr. Myles Murphy, P.P., Tintern since 1829 was now transferred to the parish of Wexford. Having spent most of his life in Wexford he was fully conversant with the needs and problems of the parish. The one outstanding problem of Church facilities for the people would have to be faced up to right away. It would need several years of prudent study before the best solution to the problem could be definitely arrived at -whatever form that decision should take it would involve the finding of a very large amount of money -and economically, things in the town were only getting on their feet. Wexford was beginning to see the first signs of the commercial boom that was to reach such heights some twenty years later.

In the latter days of December 1849, Dr. Murphy was elected Bishop of the Diocese but by now the plans had been perfected. One of his last acts as Parish Priest of Wexford was to call a public meeting in the Franciscan Church on January 27th, 185O. The decision of this meeting was a heroic one -to build two new Churches for the people of Wexford.

Dr. John Sinnott, President of St. Peter’s College, was appointed to succeed Dr. Murphy as Parish Priest of Wexford on March 13th, 185O, but died on 27th May the same year without having taken possession of his parish. Then in June 185O, Very Rev. James Roche, P.P. of Ferns was transferred to Wexford where he ministered until his death on March 14th, 1883. 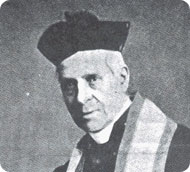 The name of Father Roche will be forever associated with the beautiful Churches of our town. To their building, furnishing and financing he was to devote every moment of his life for thirty- three years. It is only we of to-day, looking at the Churches through the perspective of a hundred and fifty years, who can fully realize the magnitude of the task he undertook and accomplished.

When Father James Roche took office as Parish Priest of Wexford in June, 1850, the decision to build two new parish churches had already been taken at a meeting held on January 27th of that year.

It is reasonable to suppose that plans were immediately drawn up towards financing this enormous project. Some money may even have been collected already, for at the time of the new Parish Priest’s installation there was £3,625 15s. 10d. to the credit of the Church building fund.

The estimated cost of the Churches was in the region of £16,000 each, for the completion of structure and essential interior furnishing. The actual cost of completing both Churches inside and out, the laying out of the grounds, the building of boundary walls, etc., was to cost much more (£54,000), but at the beginning, Father Roche had before his mind one main objective -to build two Churches which would provide at least the essentials of Catholic worship for the people of his parish.

When preaching at the opening of the Church of the Assumption in April, 1858, the good Pastor was proud to be able to say that the generous people of Wexford had to date contributed nearly £7,990, and more than £8,000 had been given; by good friends and benefactors from practically every part of the world.

The decision to build the new Churches was received with great enthusiasm by the people of the town and they responded with magnificent zeal and generosity to the call of their new and energetic Pastor. The system of collecting was ingenious, if rather unique. The financing of the building programme required that Father Roche should be able to estimate at least approximately the potential capital available and what was even more important, that he should be reasonably sure that these potential assets would in fact become actual contributions.

With these two points in mind a house to house canvass was made. The contributors were asked how much they could or would pay towards the Church fund in the next five years. Their names were entered in a collecting book with the amount, large or small, they promised to pay. They could honour their promise there and then or they could, as most people seem to have done, pay five annual instalments. How energetic were the workers, how co-operative the people, can be seen from the fact that in one single week they put down their names for over £3,000. But names in a book are one thing – money in the bank is something else. The first instalment under the system became due and was collected on October 12th, 1851, when Father Roche received £600. This was to be the first of the Grand Annual Demonstrations of generosity towards the Church.

They have been held without a break, in the month of October, every year for the past century, and continue to be the main contribution of the Faithful towards the maintenance of the Parish Churches. This was the beginning, but each year without fail the people kept their promises. The first five years brought in its promised £3,000 and more, the second five years met with a similar response. After that, with the Churches almost completed, the people of Wexford claimed them as their own and considered the annual contribution towards their upkeep, as a sacred obligation.

In addition to the annual collection or as it was at first the “Keeping of Promises” there were special district collections taken up from house to house every week. It was familiarly known as “Chapel Rent ” and is still known by that name today. The “Rent” was very small-only a penny or two, but over the years it amounted to a considerable sum, averaging about £28 per month. 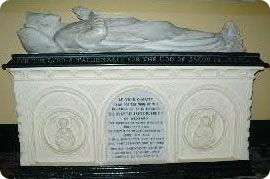 Father Roche was also the recipient of many private donations from well-to-do people, both inside and outside the parish -nor were these gifts confined to members of the Catholic community-among the donors we find the names of enlightened members of other religious persuasions.

Writing in the Autumn of 1862 Mr.Lacey in his Memoirs tells us that “Up to the present time the amount expended on the Churches exceeds £20,000 about one half of which was subscribed by the parishioners, the remainder collected in various parts of the world chiefly from Irishmen connected with county Wexford, whose prompt and generous contributions towards the completion of these temples of religion, prove the sincerity of their Faith and their love of Fatherland.”

Indeed it may with truth be asserted that no churches erected at any period in this country or perhaps in any part of Christendom, ever received such widespread and universal manifestation of sympathy as did Father Roche’s Churches in the way of substantial pecuniary subscriptions and donations.” In November 1867 Father Roche records that up to that date he had expended £28,000 on the parish Churches.

As a further incentive to people to make contributions on special occasions, the Church Builder during his visit to Rome in April, 1854, obtained from Pope Pius IX the Apostolic Blessing for all who had given or should give donations to the new Parochial Churches of Wexford.

Those who wished to avail of this privilege and Blessing received a special parchment headed with an engraving of the Churches, and bearing the Apostolic Blessing in facsimile of the Pontiff’s handwriting. The lower portion of the document was detachable and was returned to Father Roche with the name of the donor and amount of donation.

No account of parish finances at this time would be complete without reference to the contribution made by the ” Sailor- men of Wexford.” We are told that during those days it was no uncommon sight to see sailing ships tied up three deep along the quays. The Wexford men sailed the seven seas-were known in, and knew the ports of half the world-the Bushers, the Bents, the Murphys, the Roches, the Codds, the Gauls, the Staffords, the Walshes, the Rossiters-to mention but a few of the locals who were amongst the “Iron Men ” of the days of sail. Sailing was their first love, their only livelihood – their lot was hard, their wages not so great, but the hissing spray, the creaking spars of a well-found ship was sweet music in their ears. As they run home on a fair wind and anchor in the Bay waiting for the tide that will take them over the Bar-we see them with straining sea-blue eyes searching the distant town for sight of the Churches that are slowly but surely rising from the ground. In a few more years they won’t need to look so hard, for then two beautiful white spires will raise their cross-decked heads to heaven- landmarks for the sailors of ages to come.

Then at last the Bar is crossed, the Quay is made, the good ship is safely tied up, but ere they set foot on land there is one last reckoning to be made. “Don’t forget the Canon or we needn’t go ashore.” A sailor’s cap is passed around. No one would dare to refuse such a cause.

So as we look through the parish books in the neat hand of the late Father Roche, we see like visions from the past the old sailing ships of Wexford ‘come safely o’er the Bar-“The Helen, The Hope, The Princess, The Petrel, The Shamrock, The Falcon, The Rambler, The Tempest, The Lucinda Jane.” Hurriedly, impatiently almost, they come as if anxious to hear the latest news from home. Happily a sailor- man steps ashore-a twinkle in his eye -money in his fist. Along the Quay there comes an ageing Priest of noble mien and smiling face. With the little group he stops-a word about the voyage-a word about the home maybe-but one subject is never mentioned-money. The little contribution is handed over, with regret that it isn’t twice as much.

And so they come and so they go- sailing the seas of the world. Ah! if only for once they could sail home with a cargo of gold to help Father Roche to build the lovely churches of Our Lady-a beautiful dream-but alas !-only a dream.

Year after year. the steady stream of contributions came flowing in-the pounds of the rich, the shillings of the working men, the pennies of the poor.

The main structure of the Churches was completed by 1858 but the constant seeking after perfection should not cease until the magnificent buildings had been furnished with the best and most beautiful that money could buy.

By August 1881, the ambitions of half a lifetime had been achieved. In the thirty years since the Foundation Stones were laid £52.437: 18 : 11, had been collected and expended on the Churches. In that short time the priests and people of Wexford had made up for the destruction of centuries. The ancient ruins would long remain to remind us of the past but the Twin Churches were the symbol of a new Wexford, that in better and more peaceful times, would cherish the Faith of its martyred fathers, and would profess It with a pride and glory, that was denied It in the dark and evil days.

Any cookies that may not be particularly necessary for the website to function and is used specifically to collect user personal data via analytics, ads, other embedded contents are termed as non-necessary cookies. It is mandatory to procure user consent prior to running these cookies on your website.